I chose to work on this project because I would actually make a difference in Lemurs' lives rather than building something that would remain in the classroom.

To design a feeding system for the lemurs at the Duke Lemur Center that can be placed 15-25 feet up a tree in order to simulate feeding in the wild, while meeting sanitation and safety standards for the lemurs.

The Duke Lemur Center, a world-renown research center based in Durham, hosts scientific endeavors which span an array of disciplines, including researchers who collaborate in fields including primate behavior, genomics, physiology, and paleontology. Currently, to feed the lemurs, there are wire mesh baskets fixed low on trees to make it easier for staff to change out the food and water in the feeders. Lemurs in the wild normally find food that they forage for high atop trees, so the process of finding food is not a challenge for lemurs. The goal of the project was to create a flexible, sanitary Lemur feeder that can both be placed high up on a tree, but also easily-accessible by workers at the Lemur Center.

The team began by making simple representations of the feeding system out of basic craft materials, including straws, yarn, paper, cardboard, and a lot of masking tape. By quickly moving through the different prototypes, they were able to ensure that they prototyped almost every envisionable design. The low-cost, basic materials allowed the team to play with many different designs before they turned their prototype into a more permanent, higher-cost alternative.

One of the biggest issues the team faced was getting time with a plasma cutter in the Engineering Design Pod to cut aluminum for their final project. As a result, the team learned to make several prototypes with wood before they moved onto a final aluminum design. By doing this, the team was given a stronger base from which to build a prototype.

One of the team’s biggest help was team mentor, Dr. Virgin. As none of the first-semester freshmen had taken classes in statics, determining the robustness of the solution proved to be a difficult task. However, with his expertise, Dr. Virgin was able to help the team figure out whether or not the team’s system for feeding lemurs would be strong enough structurally to support the loads it had to.

Since finishing the project, team member Trevor focused on tying up loose ends on the design side, and then actually implementing the solution. The device was finally implemented in Spring of 2018. 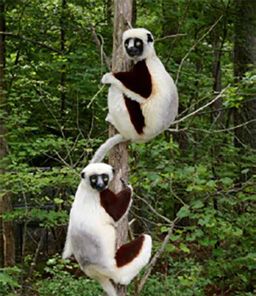