The FYD experience “solidified my interest in engineering because it provided me with an idea on how exciting it can be to build something on your own. When you’re in engineering, you always have the opportunity to create something new and something beneficial to someone else.”

A majority of diseases found in humans are also found in fruit flies, making them a common test subject for biomedical research. A typical experiment might first involve breeding fruit flies in large numbers to establish a test population, and then introducing a disease to determine whether or not there are resultant phenotype changes in the fruit flies’ DNA. This type of experiment requires that the fruit flies be repeatedly transferred from test tube to test tube, in order to continually clean out the sticky fruit fly food residue that forms at the bottom of each test tube. Because this “fly flipping” procedure is often done manually by researchers, it can be both exceedingly time intensive and inefficient.

Although the technology needed to perform these “fly flips” by mechanical means actually does exist, and has been used in the past, the associated costs and space requirements made its use largely unfeasible for most researchers. It was precisely for these reasons that First-Year Design (FYD) students Ethan Song, Simon Gorbaty, Logan Tarman and Carl Fisher were drawn to this project in the first place; this fly flipping venture would necessitate the creation of an entirely new and original tool that would be compact, accessible, and cost-effective.

Although team members were highly enthusiastic about creating an entirely original design, starting from scratch had its challenges. Song explains, “Brainstorming for us was really tough, just because it was such a unique problem.” The team experimented with many design concepts in an effort to strike just the right balance between volume and precision: while the goal was certainly to maximize the quantity of flies flipped, the team also had to minimize the number of fly flip failures.

The ultimate “fly flipper” design: a waffle maker-inspired device that can flip along a single axis. Essentially, test tubes containing fruit flies are placed on one side of the fly flipper, and empty test tubes are placed on the other. The device is then flipped over, causing the fruit flies to travel to the new test tubes. This prototype allows researchers to “spend less time doing all the hand labor, and spend more time actually studying the genes of the fruit flies.”

Even with a final prototype in hand at the close of fall semester, team members Song and Gorbaty weren’t ready to let go of the project quite yet; as such, they signed up for FYD’s “Design 2 Deliver” course, which allows committed students to continue their engineering design process into the spring semester. Not only did Song and Gorbaty see potential for improvement on their design, but they also felt driven to explore some entirely new ideas. One such project involves creating an accompanying database for the test tubes. This will help research labs track key data such as where vials are located, which vials have already been flipped, and when they need to be flipped again. As is true for all of these additional ideas, the students’ objective is to streamline the entire fruit fly research process, not just the fly flipping portion of the operation.

This entire experience has had an undeniably significant impact on the goals and future plans of all team members. Gorbaty confirms that the First-Year Design experience “solidified my interest in engineering because it provided me with an idea on how exciting it can be to build something on your own. When you’re in engineering, you always have the opportunity to create something new and something beneficial to someone else.” The team members further advise that incoming students should pick projects they care about, and that all available resources should be utilized to accomplish their project goals: “Prototype as much as possible. Duke has so many resources that they give to students, especially those in first-year design. We have shelves of any material you could possibly ask for. It’s amazing how much we have available to us, and people should use it as much as possible.” 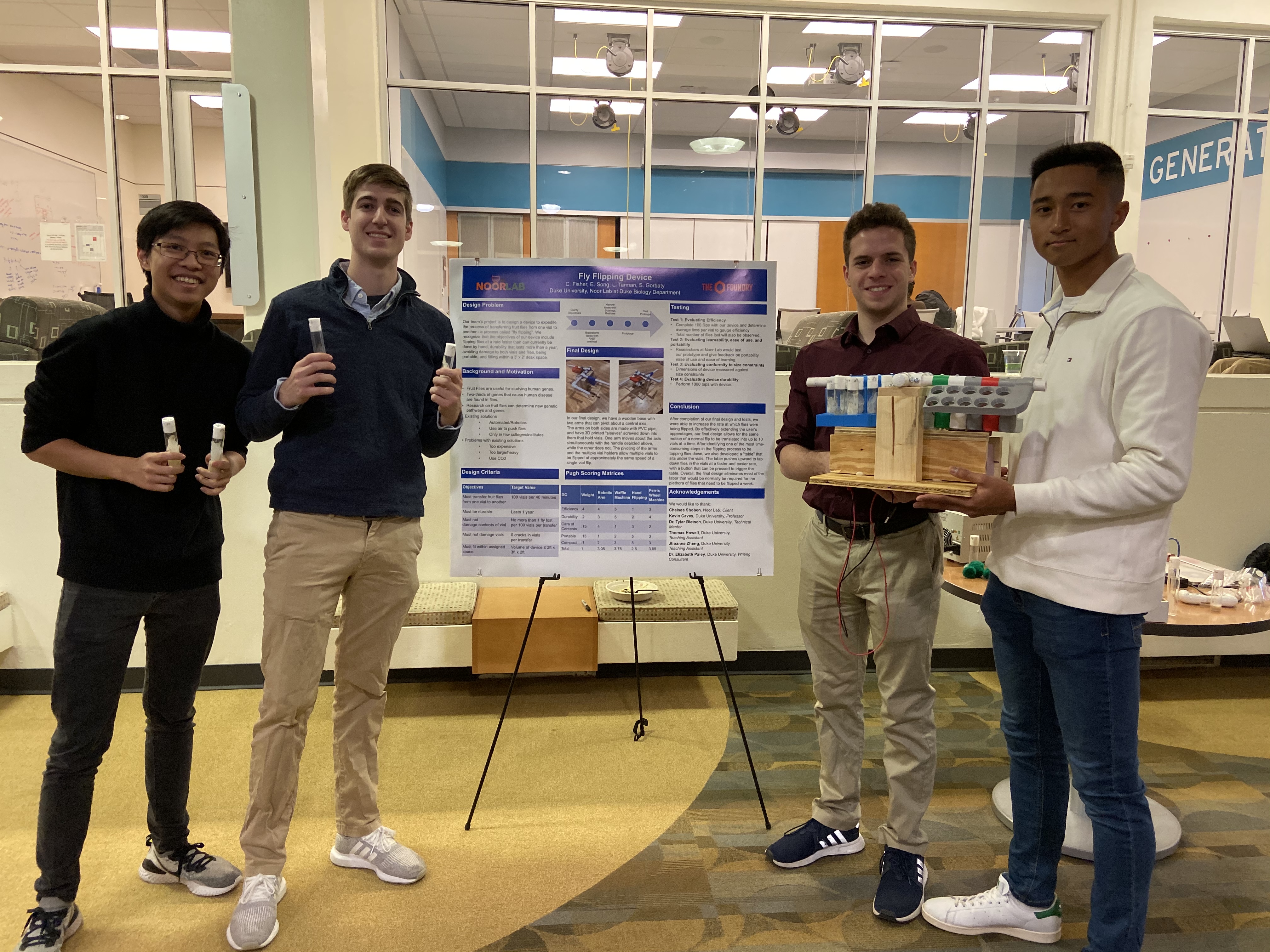