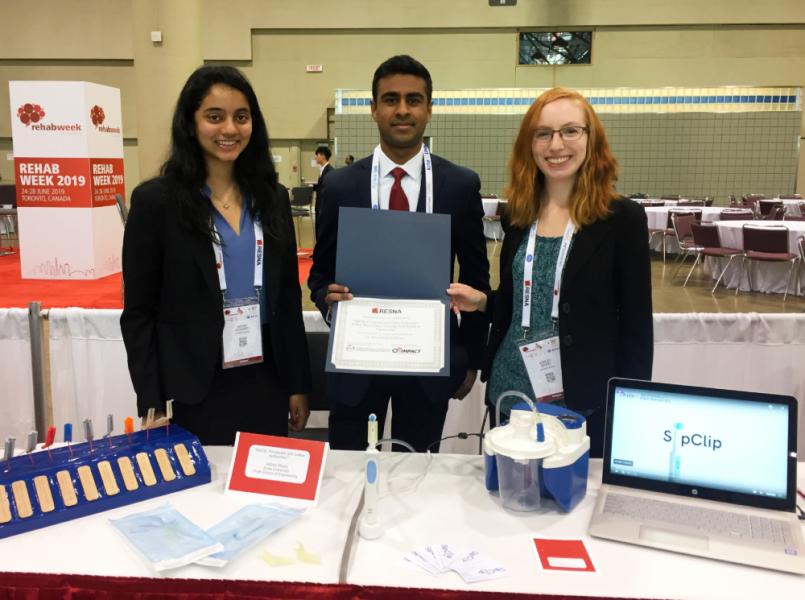 Team members Ashley Myers, Anish Karpurapu, Meena Gudapati, Yoo Bin Shin, and Frank Marinello began brainstorming together more than a year ago, after the Duke ALS Clinic challenged the students to create a toothbrush that could be readily used by individuals suffering from ALS. By combining their backgrounds in biomedical, mechanical, and electrical engineering – and with a shared commitment to helping others – the team got down to business. After several months of work, countless discarded ideas, and scrapped models behind them, the students at last had a final prototype: a “kit” of various specialized adapters that add suction capabilities to popular electric toothbrush brands.

“We received a lot of positive feedback about the usefulness of the SipClip. I also received contact information from ALS clinics. The representatives said they would be interested in participating in clinical trials.” - Ashley Myers

After presenting their prototype at RehabWeek’s Inventor Showcase, investors and healthcare facilities were quick to express interest in the team’s innovative design. The team has been inundated with connections to prospective partners and potential product beneficiaries for clinical trials in addition to ideas on how to further their product to expand its scope of impact. The team, who originally viewed attending the conference as a “culminating step” of the project, is now equipped with invaluable connections and new ideas. With their recent IRB approval and a provisional patent application pending, the team is realizing this may only be the beginning.

The team’s number one piece of advice for fellow First Year Design students: keep an open mind and don’t be afraid to scrap everything you’ve done and pursue a completely different design idea. Even though it may be daunting, especially after having worked for months on one specific path, it may ultimately be the perfect formula for success.